With constant access to the world in our pockets, are all dates double dates now?

The idea is that we are constantly dealing with how to decide where to direct our attention and struggling to be present in the moment.

Below is the process of how we got to our concept.

We were sharing our ideas about the different concepts. Originally, my idea was to show how people are being controlled by other people. I wanted to present that as in the metro system. The audience get to control the speed of the metro train, while the video sculpture of a person holding on the rail of the subway will react towards that.

Patrick was mentioning about extending his dystopian interpretation of relationships from his previous project. He was picturing how attention from each other is easily taken away from technology. He suggested to have a portraiture of the relationship rather than a person, which I think was brilliant.

Dina mentioned about to record the whole day of a person who is a minority. Him or her being a minority as in they have noticeable features on their face that will attract attention by the public. For instance, somebody will burnt marks or disabilities. We liked that idea, but the way to implement it may be difficult and we might not be able to gain permission from the person, since the camera will be strapped around on them for the whole day.

Hyunseo’s idea was a bit of loose so we didn’t carry on.

We then watched several videos as an inspiration:

– Figuring out the Interaction

The video footage of the couple was created by Dina and Patrick. The background of the video was influenced by the following image from a game called the Red Strings Club. 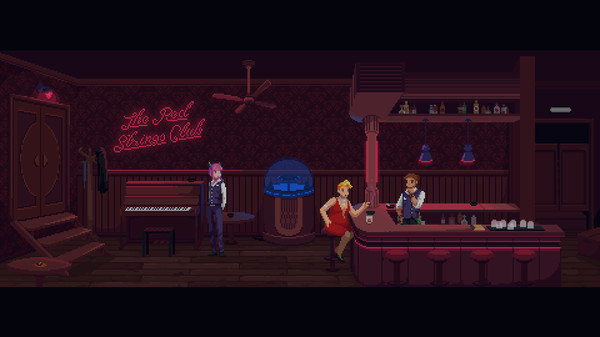 We wanted to create an atmosphere for dating. We thought of incorporating the style from the image and create a scene in a restaurant. Then we determined to have the video projecting onto a fabricated restaurant surface.

We would also fabricate a phone to enable the interactions mentioned above.

– Video and After Effects

Dina and Patrick were in charge of creating the videos and they made amazing special effects to elaborate the idea of giving away attention to the digital world rather than in the physical world. The lighting above them also indicates the strength of their relationship.

I worked mostly with coding through Arduino, fabrication, and working with Sprite MedeaViz which is a triggered video repeater for compact video projection.

The code is quite simple in my mind. I used accelerometer and Arduino Uno to determine if the phone is up or down. I added the button as another condition to trigger the third video.

You can look at my code here. I used the library for the accelerometer Arduino_LSM6DS3.h

Here is the video of me working with Sprite and testing videos.

The problem working with Sprite during my coding process is that our video length is too long that we have to use delay in Arduino. This makes the phone less responsive especially when user flips the phone. They would have to wait for the end of the video to watch the second video. Although this what we intended to do, through our user testing, most of people don’t have the time to wait for a 20 seconds video to be over. Also, they won’t notice when the video switches to the next one since they are too similar.

I made the fabrication of the phone and created an enclosure for the electronics.

Hyunseo made the fabrication for the restaurant.

It has been such a wonderful journey to see it working and have people played with it.