Build an enclosure for an electronics project using any tool(s) or technique(s) you like.  Make sure that you can get back inside to make repairs, change batteries, modify, etc.  The enclosure should have multiple components: buttons, switches, sliders, connectors, display lights, dials, etc. 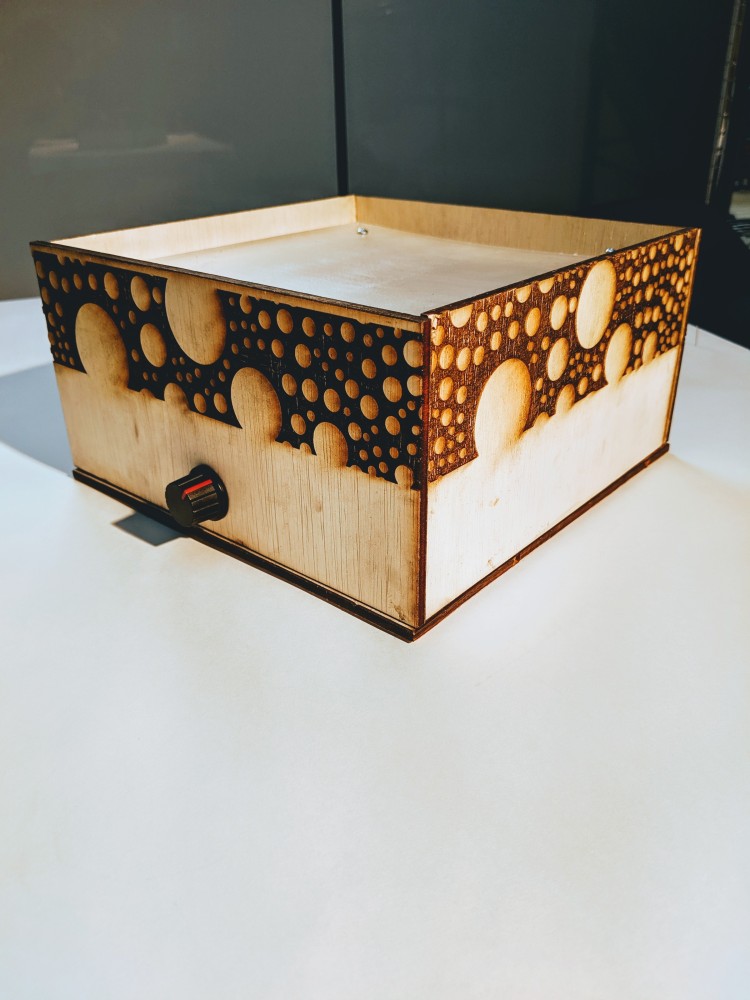 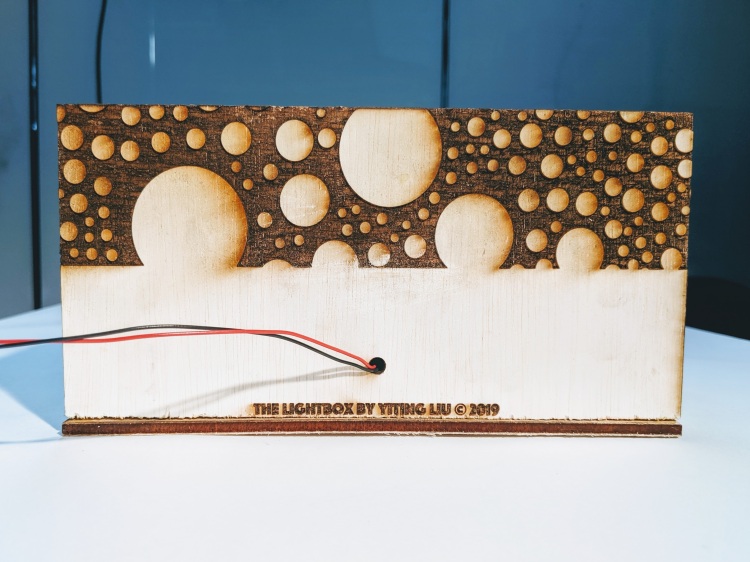 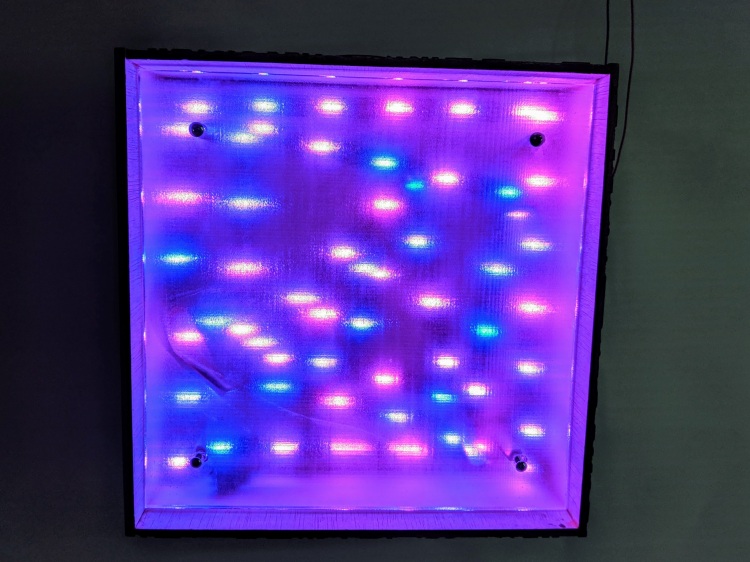 I created a lightbox that changes the range of color when you turn the potentiometer. It takes several time for me to get it right. I went to the container store and bought two 6*6*2 open-boxes. I was designing with two layers so that I can have the LED strip attached on the middle layer while the electronics are hidden in the lower layer. A piece of frosted acrylic would be on top of the box to diffuse the light.

However, the process was not smooth. I tried on the boxes and I accidently broke it when I was drilling a larger hole into the side of the box. Therefore, I moved onto using cardboard. My alternative goal is to create a light box outside of the cardboard. However, due to the thickness of the cardboard, I experienced a fire while printing. Therefore, I switched to making a box out of a 1/4 inch plywood.

The design draft is as below. 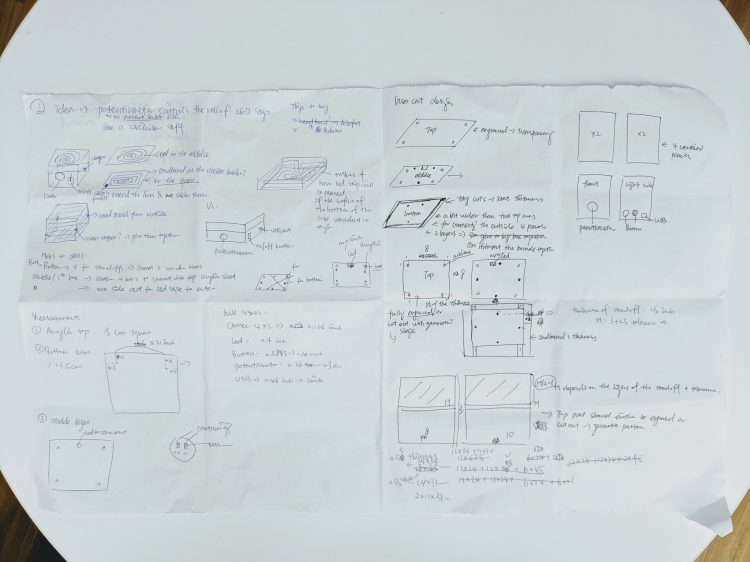 I designed two bottom layers, one middle layer, and four side panels with engraved designs to be laser printed in wood. One acrylic cover on top was to be engraved to create a more exquisite patterns which I didn’t do due to lack of time. The goal is to glue the panels to the bottom large layer so that they can be taken out. While the bottom smaller layer, the middle layer, and the cover share the same dimension which is 8″ by 8″, the goal is to connect them together through standoffs so that they work as a whole can be taken out of the outside open box made from the large bottom layer and four panels which are glued together.

The four panels on the side are different sizes. They are grouped in two. Two of them are 8.5″ by 4″ while the rest are 8″ by 4″ since I took into account of the thickness of the plywood which is 1/4″. In this way, the large bottom layer which is 8.5″ by 8.5″ would be perfect to hold the side panels. 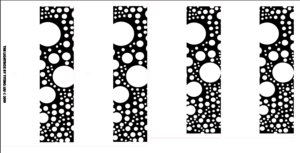 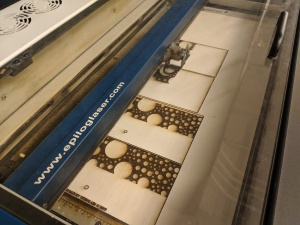 I then glued them together and have them sit for around an hour. 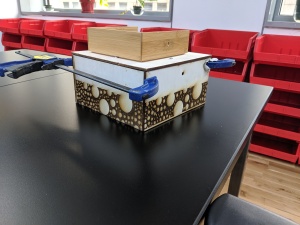 After gluing them together, I worked on the positioning of electronics and the LED strip.

As the pictures shown below, the breadboard and the Arduino board are securely stable on the wood and I glued the wires together to make sure they are stable and won’t have any wiring situations.

I also made sure the wire that connects the LED strip are long enough so when I open the box, it won’t be pulled out by the action. I used hot gun to secure the position of the LED strip as well to make sure it won’t move during the movement of the box. 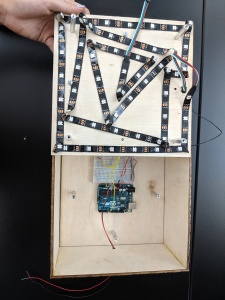 The whole process of laser cutting is not difficult but long since I have to engrave a lot. For the engraving on the one acrylic on its own takes an hour. I also spent around 4 hours on a Tuesday night to make sure the panels are ready to go.

Due to the lack of time, I only engraved once on the clear acrylic to create a frost feeling. If I have time, I would incorporate the design of the side panels on to the top and engrave it on top to make it more interesting.

I would purchase power supply and DC adapter as well so that the whole box can be plugged onto the wall safely.

I will also design the holes a slightly bigger since most of the holes are tight comparatively to the screws. Below is one example of the LED head which took me a long time to push through. I will also give more tolerance in a way so that each layer fits. 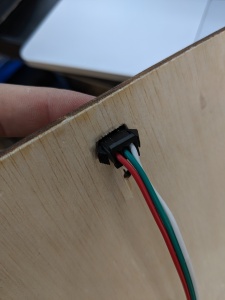 In general, I am very happy of my project and I will definitely use it in my home when I get the power supply and wire to plug it in the wall!