I played around with multiples ideas to make a flashlight since the requirements are simple: to be portable, and to have light. I thought of making a piece of jewelry such as a ring or a bracelet yet at that moment, I didn’t have enough voltage of a battery to support three led lights. Also, I brainstormed several options for hooks to function as the switch of the project but the right material didn’t come to my mind.

A day ago, I swapped my Intro to Fabrication class from second half of the semester to the first half so that I can be less busy as the semester goes on. Hence, there are several options that I could have explored but I will catch up what is learned in the first class and spend more time to practice my craftsmanship.

Inspiration of the Final Idea

Since my time is short, I had to draw inspiration from my surroundings. I realized how simple it is to turn on a led light with a 3v coin-shaped lithium battery and how compact it is. Given that last night, I attended my best friend’s birthday party, I had an inspiration of creating something similar to a cake. On top of the cake will be the light. I chose the colorful paper straw not only because it resembles a candle on the cake but also it can fit the yellow led light.

I selected the straw in the kitchen, a yellow led light, and a 3v lithium battery from Duane Reade. I glued the led light into the straw so that it is stable inside. Since the straw is too long, I cut one third of it to be the candle. 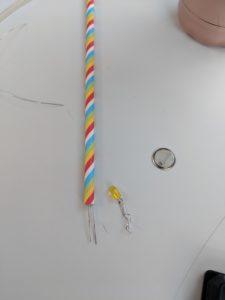 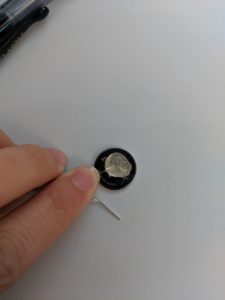 I glued the part together onto the black box. Since it is missing a lid, I want to cut a plastic sheet from the package of the battery to function as the lid. Since I don’t have a switch in the project, I planned to use the twist of the straw to control the negative leg of the led light. Therefore, I need the lid to be openable so that when something goes wrong, I can still fix it. That’s why I didn’t use electric tape to tape it since I know the battery is gonna run out by Thursday noon. 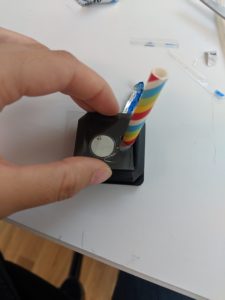 I tried to cover up the plastic sheet so that the inside won’t be so transparent. 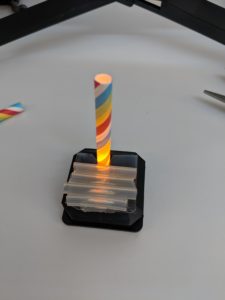 I didn’t like the previous idea and changed to use the rest of straws to function as decoration on the lid. 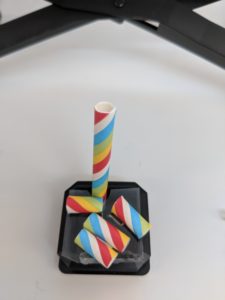 I glued the design on top of the lid and realized the part where I glued the plastic is ugly. Therefore, I cut the straw in half as below to cover up the edge where you can see the clear glue trace. 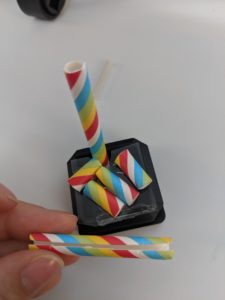 I cut the edge-protecting straw in to the same length as the side of the black box and tah-dah! 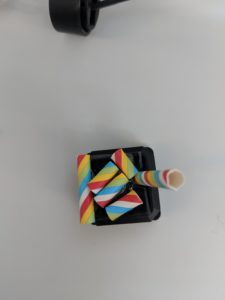 This is when the light is on. 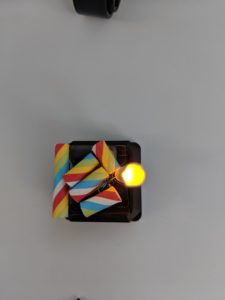 If you want to see what’s in side, you can lift the lid up gently. 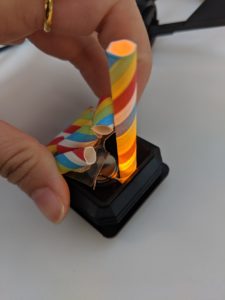 Here is the video demo for the flashlight. With a twist of the candle/straw, you shall have light! Make a wish!